From the far side of the world to just around the corner, It's Always Ohio.

Making favorite lists is terribly hard, but with the new year already upon us it only makes sense to reflect on where we’ve been in 2015.  So although nearly impossible, I’ve tried my best to whittle down a list of favorite Ohio spots into a mere 15.

Disclaimer: 15 could’ve easily turned into 50 and there’s no rhyme or reason to the compilation, just simply locations across Ohio that we thought are swell.

Close Quarters in Avon Lake, Ohio:  With around 20 bar stools, this tiny bar certainly lives up to its name but makes up for what size it lacks in character.  Packed to the gills with wacky memorabilia and old-school patron polaroids, there’s hardly a blank spot on the walls.  If you’re lucky enough to find the charming proprietor present, he’ll take an aforementioned polaroid of your mug, affix it to the wall and further cement you into Cleveland tavern lore.   Make sure to try the chicken wings, which are contest worthy and wash it down with a cold beer from their surprisingly large selection.

Katalina’s in Columbus, Ohio:  The state capitol doesn’t lack delicious breakfast spots, but Katalina’s in Victorian Village is the cream of the crop.  Superbly charming with excellent outdoor patio space and locally-made goodness, I only have two other words for you: pancake balls.  Seriously, their signature item is made with local stoneground flour, ridiculously tasty and filled with things like Nutella, dulche de leche and pumpkin apple butter. 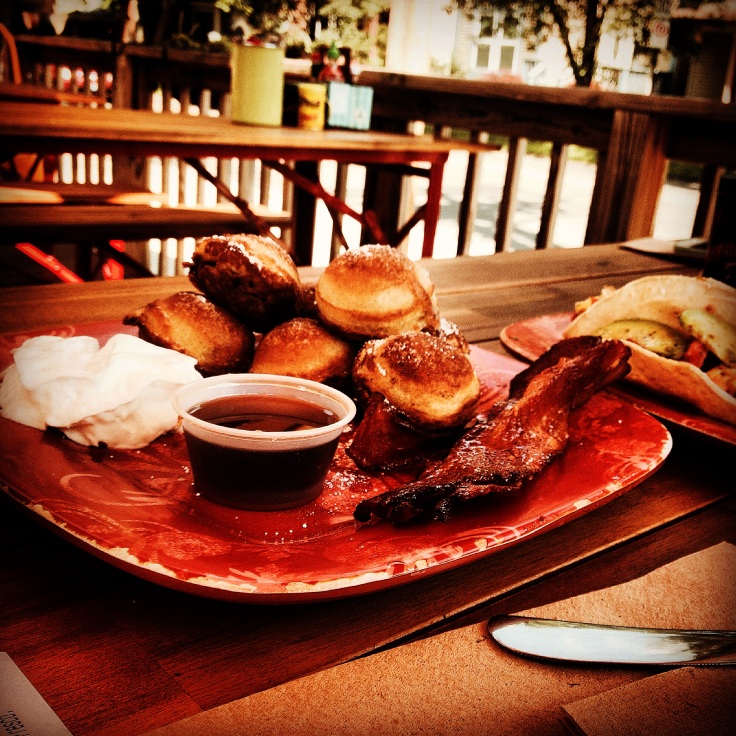 Shisler’s Cheese House in Orrville, Ohio:  This old school cheese house is perfect.  From Rita, the story-filled owner to the mazed aisles of homemade trail bologna and countless local treats, it almost feels like a shop that could’ve existed on the Frontier.  Rifling through more cheese in a year than you’ve probably ever laid eyes on, I’m guessing the folks at Shisler’s rarely get stumped playing cheese trivia.

Loganberry Books in Shaker Heights, Ohio:  My first visit to this glorious gem of a book store was to hear avid budget traveler, Nomadic Matt, speak to a small group of folks about travel hacking.  Independently owned and operated in the historic Larchmere neighborhood, Loganberry boasts over 100,000 volumes, which is staggering for a bookstore of this size — And we’re not talking Books-a-Million, as this place is meticulously curated with new, used and rare books of all genres.  Plus any bookstore with Oriental rugs and wandering cats is fine by me.

Porco Lounge in Cleveland, Ohio:  Located between the historic neighborhoods of Tremont and Ohio City, this Polynesian pleasure is where patrons come to get their tiki fix and escape from the traditional midwest day.  Fine spirits, fresh squeezed juices and house made mixers are intricately meshed together in a lush atmosphere to create potent, delicious libations that would make Don the Beachcomber proud.  My favorite, trying to get through all the levels of Painkillers.  But if you’re really feeling randy, go for the Tiki Bob’s Concussion — Careful, you’re only allowed just one.

Tony’s in Athens, Ohio:  Hailing from Ohio University and fresh off a recent trip down memory

lane, it’s imperative that I include at least one of my 57 favorite places in Athens.  Tony’s must be that place.  If you’re looking to relax with friends, throw some darts and have a drink in a quintessential college bar, there’s no place better watering hole.  Grab a Hot Nut shot and treat yourself to some nostalgia old boy.

That is all.  Oh yes, and try the burger in this tiny alley beer joint.  My grandmother always refers to good bars as “beer joints” and I feel only the best taverns deserve such a timeless moniker.  Johnny’s definitely does.

Hocking Hills in Hocking, Ohio:  Arguably one of the most picturesque places in Ohio, it’s nearly impossible to snap a bad photo here.  Walking around with your pup for a day at Hocking Hills almost feels like a form of mediation — Soothing waterfalls and earthy caves set amongst lush vegetation bring about something everyone desperately needs after a week at the office: peace.  Don’t care much for relaxation?  Zipline over the canopy I’ll be mellowing out in.

Catawba Island Brewing Co. in Catawba Island, Ohio:  Convert an old marine storage facility into a really cool brewery, dish out some tasty craft beer and you have yourself a pretty sweet establishment.  Sweaty summer day?  Try the excellent Whitecap Wit and if you time it right, maybe you’ll get to taste their oddly delicious Habanero Hefeweizen. 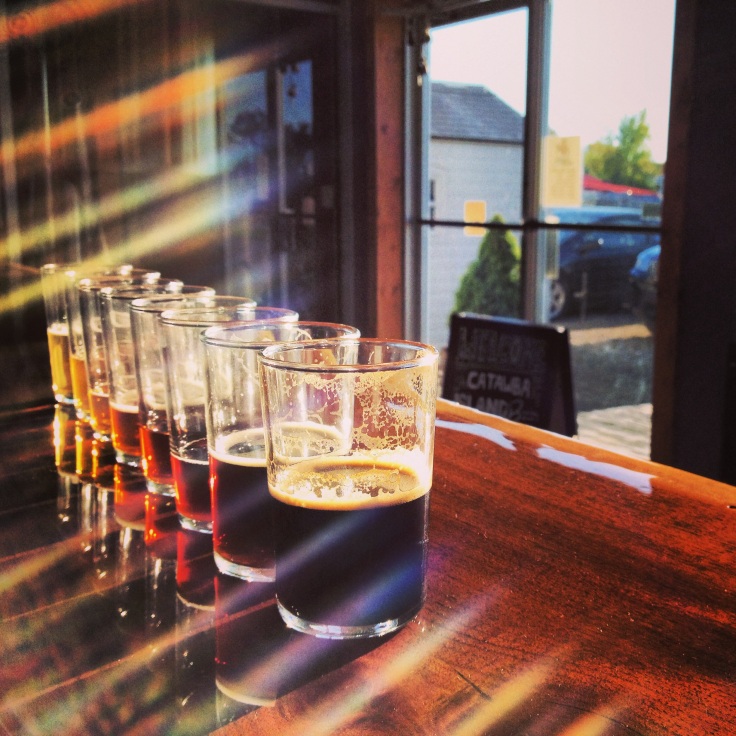 Old Forge Cafe & Creperie in Put-in-Bay, Ohio:  Beside being the best island in the world, Put-in-bay has an array of places we could’ve included in this list but had to withhold for the sake of brevity.  Honestly, best island in the world — Pretty sure it would hold up in court.  Okay, now that I’ve professed my love for South Bass Island, to the Old Forge.  Their carefully crafted crepes (say that three times fast) taste wonderful on their own, but when you combine the unique atmosphere of a historic island blacksmith shop that’s been brought back to life, they taste even better.  Plus they have an outdoor, Key West-ish garden bar with a phenomenal beer selection.  Go here next summer.  Just hop on the Miller Ferry and go. 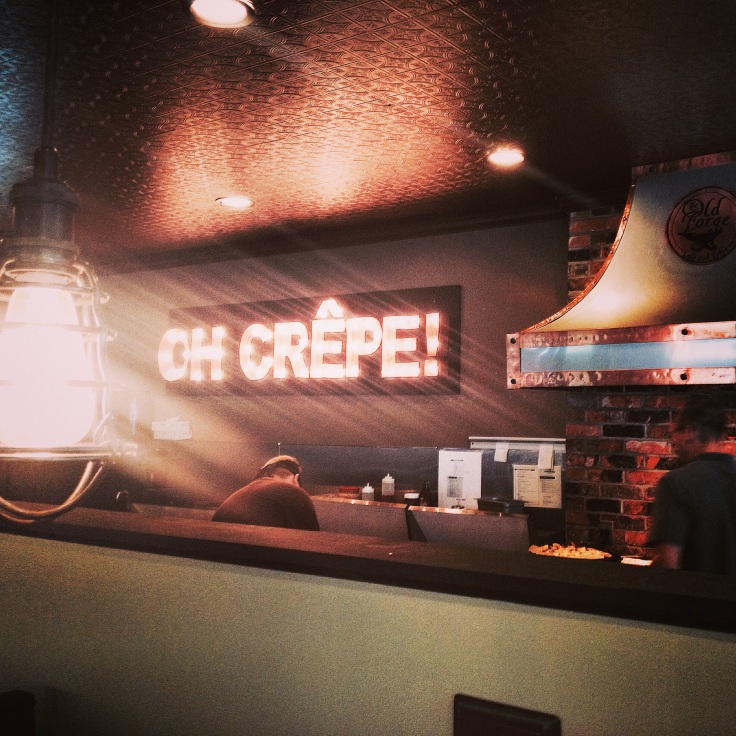 Volstead Bar in Sandusky, Ohio:  If you fancy yourself a cocktail connoisseur then this place is the nines.  Housed in an old brothel called the Green Door, the Volstead Bar is a perfectly executed throwback to the days when Al Capone toted illegal booze and bar patrons took immense pride in what they imbibed.  With 24 seats, zero televisions and a no-cell phone suggestion, the cozy confines are excellent for those important conversations you were thinking about having at that last bar.  Try my favorite if you like bourbon, the sazerac.  If you don’t like bourbon, then you’re dead to me.  Kidding, kidding…try the popular French 76, the English derived Pimm’s Cup or the classic Aviation. 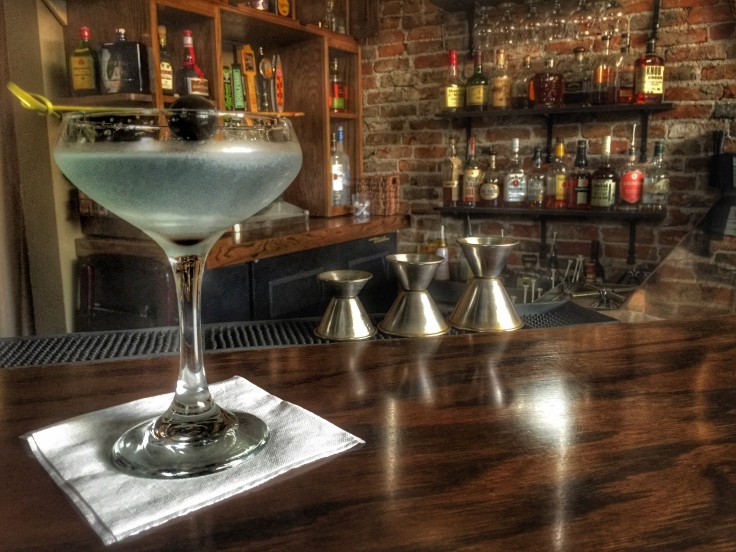 La Dolce Vita in Cleveland Ohio (Little Italy):  Right in the heart of Little Italy, which is a very distinctive area as a whole, La Dolce Vita personifies what true Italian food and Mediterranean atmosphere is all about.  Go for the street side cafe seats outside if the weather’s nice, however the inside of the establishment is just as unique.  You can’t go wrong with the Eggplant Del Giorno for an appetizer and as for the main course, my vote goes to the Veal “Pavarotti” in a marsala wine sauce.  One more thing and I’m willing to live with the finality of this statement, their sangria is the best I’ve ever had.

JAFB Wooster Brewery in Wooster, Ohio:  There’s a good chance you’ve seen their beer if you’ve been to a Cleveland Browns game and probably a greater chance you’ve had three or four considering that’s usually what it takes to stomach our beloved NFL franchise.  Ultimately though these fellas are much more than just one canned beer — These Wooster natives are brewing up some ridiculously tasty beverages, as evidenced by their recent silver medal at the Great American Beer Fest for their Rain Delay IPA.  My favorite?  Step Up Pale Wheat or the Mean Bourbon Bean Stout.  Ultimately it doesn’t really matter which brew you choose while you’re here, I haven’t had a bad one yet.

Fatheads Brewery in North Olmstead, Ohio:  If JAFB is considered an up-and-coming brewery then this place would undoubtedly be considered an old Ohio staple.  Year in and year out their beers are awarded gold medals at every competition imaginable and somehow just keep getting better.  Beers like the Sunshine Daydream Session IPA and the Hop Juju Imperial IPA tend to be my go to’s, but much like JAFB it’s nearly impossible to find a sub-par beer.  Make sure to bring your appetite though, as their delicious array of signature sandwiches are sure to be bigger than your head — Unless you have an abnormally large dome, then maybe not.

The Village Pump in Kelleys Island, Ohio:  Kelleys Island unapologetically does its own thing and that’s cool.  From remote white sand beaches encompassed in limestone piers and 20,000 year-old glacial grooves, to island wineries, breweries and character-laden taverns, this picturesque Lake Erie island is as unique as it is fun.  With the Village Pump, there’s a huge emphasis on “character-laden tavern” part of that description as you’ll soon find out after receiving the obligatory high-five from Gary, proprietor of said establishment.  Start off with a cup of clam chowder, followed by a perch sandwich and wash it all down with their famous Brandy Alexander — that’s Kelleys Island lunch perfection right there.  And if you’re feeling adventurous, head to the bar and shoot back a storm cloud.